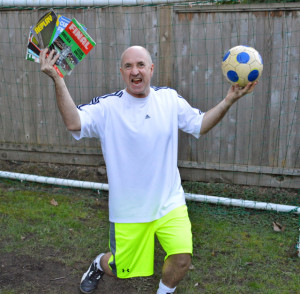 “I was raised in England and grew up like most young kids playing football at school, in the playground with a tennis ball and on weekends in the park with all my friends…we swam, played cricket, tennis and other sports but football was always #1!

I collected soccer cards and stickers, played subbuteo, watched Grandstand and Match of the Day on Saturdays nights and The Big Match on Sundays religiously – and, when I was old enough, started going to Chelsea home and away games when I could. From Rotherham to Swansea. From QPR to Leyton Orient. And, of course, as many Home games as possible at Stamford Bridge and The Shed End!

It was really exciting in those days as there were terraces and seats and just to stand watching a footie game was just the best…the whole day from traveling up to the game, watching the game, dissecting the game after was just natural!

I played for my Junior and Secondary school football and University teams…had tryouts for the first division team Crystal Palace – whose youth program was the best in English football at the time – but turned it down as my mom and dad felt I should focus on education as there was not much money in football as a career.

When I moved to Hong Kong I played for the 4th X1 Hong Kong Football Club team and when I moved to Vancouver in 1995 I started playing for the West Side Strollers Point Grey Team in the Over 40’s league and for Widex in the Vancouver Engineering league.

I have supported Chelsea all my life and when my Uncle became a Director  of Chelsea Football Club in the 90s, just as they were starting to become successful, I was able to meet with Ken Bates, the chairman of Chelsea at the time after we lost the Cup Final against Manchester United in 1994, 4-0. He challenged me to set up the first official Chelsea Supporters Club overseas, which I did! The club is still going with an active membership of over 700 fans across Canada – www.trueblues.ca.

In 2005 I started on my journey of coaching youth footie in Canada with my son Oscar – where we played great footie, had some wonderful players on our team and won tons of tournaments and cups! Check out a couple of his games at these links:

I am currently coaching my youngest son Hugo who is following a similar path. Here are a couple of links to his videos:

I am also involved with a football academy called Pro Touch  – and helped in the launch of a new Youth footie club in Surrey BC Canada coaching a group of 2008 born boys and having a bunch of fun!!!

And with the unearthing of the amazing catalogue of football ground photographs that is now available to you on LFG (photos that my mother-in-law’s brother had collected over the years all the way across England, Scotland and Europe), my passion for football continues to be a never-ending journey of excitement.

I really hope you enjoy the amazing catalogue of pictures as much as I do every day!!!

Whatever club you may support it is certainly a wicked piece of history we have made available to every footie fan around the globe! 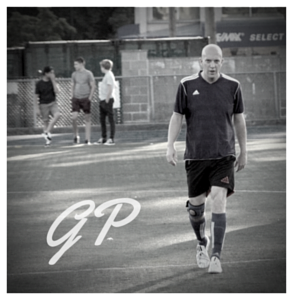 “I was born here in the late 60’s to Canadian parents, the youngest of seven. Some of my earliest memories are of playing soccer in our backyard with my siblings even though I am >10 years younger than the the next youngest. I am told I once cried to my Mum that my brothers wouldn’t give me the ball and she told me I had to take it from them so that was that. Playing in the yard we always pretended we were Brazil or West Germany, my brothers invariably being the current World Cup or European Championship holders while my friends and I were the other team. When my brothers weren’t around we played in someone’s backyard or up on the grass next to the firehall. We played for hours and I enjoyed that far more than the regimented game played with youth clubs.

There wasn’t a lot of soccer on TV, there wasn’t a lot of hockey then either just one game Saturday night, but we did get Soccer Made in Germany weekly on PBS and my first football heroes were from the Bundesliga. I didn’t know much about English soccer, aside from inheriting Arsenal from my Grandfather, but I knew all the top West German players plus a smattering of other top players from around the world. Pele was someone mythical, like Rocket Richard in hockey, but Beckenbauer was someone I saw every couple of weeks. My TV exposure to English soccer started off as a yearly showing of FA Cup Final but a weekly show followed SMiG’s premiere by a few years and that was the first time I saw English football on a regular basis.

Following football was tough here. We’d get the results and occasional league table in the papers but there was practically no other coverage. My Dad would bring me soccer magazines from European News on Robson street, magazines like Shoot! from England as well as Kicker & Fussball from Germany. I knew the clubs, the players, their grounds and even a couple of terrace songs without ever having been to a match. Dad would also pickup football books when he saw them at Duthie’s, including Brian Glanville’s History of the World Cup which covered up to 1970. My interest in football got deeper the more I learned and my Mum & Dad encouraged that interest. When I was 9 my parents gave me a London A-Z in which I painstakingly plotted the routes to the many English League football grounds in London and then proceeded to travel to each of them accompanied by Dad but navigating on my own.

Tours of the grounds didn’t exist at that time aside from Wembley but seeing the outside was a thrill for me and Dad let me navigate the various tubes, buses and trains that took us all over London. The experience also made me understand just how much a part of the neighborhood teams were with ground backing onto row houses, semi-detached, detached, allotments and even right up against the River Thames. I saw the stunning Art Deco stands at Highbury, the more utilitarian structures at Upton Park & White Hart Lane, the dog track grounds like Stamford Bridge and White City and the cathedral of the English game: Wembley. Knowing where the grounds are, or in the case of Highbury were, makes it easier to understand why most clubs can’t build the ground they need for the support they have.

We traveled to England on a regular basis when I was a kid but the first time I was able to regularly attend matches was when I lived in Firenze & London in the late-80’s -early-90’s while at university. There was always a sense of the unbelievable about attending a top flight match  that I have never lost. I didn’t get it here attending Whitecaps matches from their founding, but when I walked thru the turnstiles at Highbury for the first time I felt a giddiness that returns no matter the ground. When I lived in Italy and attended Fiorentina matches on regular basis I felt it, when I made the pilgrimage to Monchengladbach to see Borussia playing at the Bokelberg or West Ham hosting Chelsea I felt it as well at Upton Park. Going in you know the atmosphere will be special, you have the potential of seeing something unique and feeling the atmosphere of a live match.

I have only been alone in one empty football ground and it was the Olympic Stadium in Munich. I had seen many matches there on TV as a kid, it was the ground where West Germany won the 1974 World Cup, and one day I just walked thru an open gate and found myself all alone. It is attractive architecturally, a vision of “the future,” but the running track created a distance between the pitch and the crowd so the atmosphere was never that great. I sat in different parts of the stadium, moving around and taking in the view. The pitch was marked, I could visualize the players and the crowd, a dozen games took place in my head. I didn’t even consider going down on the track or the pitch but I sat in the stands for almost an hour enjoying the view.

I inherited Arsenal but I chose to support Borussia Monchengladbach, Fiorentina & West Germany. Watching German football in the early-mid 70’s was to watch the best league in the world and the West German national team performed well in 4 major tournaments from 70-76 playing attractive attacking football. I found it frustrating that few people played that style of football, preferring the British model of “boot up the wing, winger dribbles to goal-line and crosses to the big lad to head it in the goal.” Unfortunately I was a “big lad,” my coaches were mostly British, and I never quite fit into their system of play.

I lived & traveled in Europe from the late-80’s to early-90’s, always taking my boots & shorts with me wherever I went. I played pickup games at youth hostels, construction sites, parks, public squares, school yards and other open patches of ground on four continents. I have played at a water park in Cold War Budapest and in a bizarre old stadium surrounded by statues in Rome. I played with a team of international students in London and a local cafe team in Firenze. Aside from my brothers there are some people I played with for 20 or 30 years, there are some guys I played with whose kid I play with now and other guys (Ian) whose kids I will likely play with in the future.