Anfield: From Past Glory to Present Regeneration

Walk down Anfield Road today, and you will find a football stadium being ushered into the modern football era. Anfield has been the home of Liverpool Football Club since the team’s birth in 1892. But the stadium’s origin dates back to 1884, when it was opened as the home of Everton. As happens, football club members have disagreements, and this one saw one of England’s most famous clubs emerge.

Anfield has undergone numerous changes over the decades. Each time the stadium was renovated, it brought it into the modern age of football grounds. Yet, it is the recent £114 million investment in the old stadium that is truly bringing it up to the standards of the best stadiums in Europe. It is also giving more fans the chance to see their beloved Reds each matchday.

The original ground that Everton played at is a long-forgotten memory. Images of Anfield in 1884, show a stadium similar in look to many non-league grounds today. In fact, it would be more apt to call the original Anfield something other than a stadium. That word should be reserved for more grandiose structures.

During the 1880s and 1890s, Anfield was made up of four wooden sides. Two small stands ran the length of the pitch with a roof to protect supporters from the Merseyside weather. At each end was an uncovered terrace for fans to congregate on during matchdays.

In 1906, the most famous feature of Anfield opened. The Spion Kop, or simply the Kop, was named after a hill in South Africa. The stand was so steep, it influenced Liverpool ECHO journalist Ernest Edward to name it after the very hill that saw the Battle of Spion Kop take place. 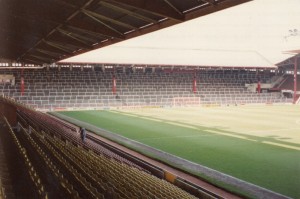 Perhaps no other stand in football is as legendary as the Kop. It has seen some of the most terrific football matches in history, and mythical stories of Liverpool ghosts helping the team score dramatic winning goals at the Kop end are rampant. Especially on Champions League match nights.

The Kop’s roof was installed in 1928. It covered the large terrace that housed the team’s most fervent supporters. The exterior of the Kop end, at the time, was far different than anything built in today’s Premier League. A small brick wall prevented fans from coming in, although climbing over the wall seemed easy. A small wooden door held the throng of supporters out, and one staircase led fans into the Kop. With thousands of people on hand for matches, it seems like injuries would have been common from the rush of fans getting in or out of the ground.

In 1957, as football grounds around England installed floodlights, Anfield did the same. Now, football at night was possible. Nearly 20 years later, the main stand was revamped and the old, iconic, rounded roof was changed. In its place was the straight stand that is seen around the country today. It gave Anfield a similar look to other grounds, and unfortunately, took some of the charm away.

Perhaps the final, most historic change Anfield underwent was after the 1993-94 season. That summer saw the Kop become all-seater.

While other stadiums have been built or other teams have ascended to the top of English football, there is still no other stadium in the United Kingdom that conjures the thoughts and memories of Anfield. It is truly a legendary football ground.